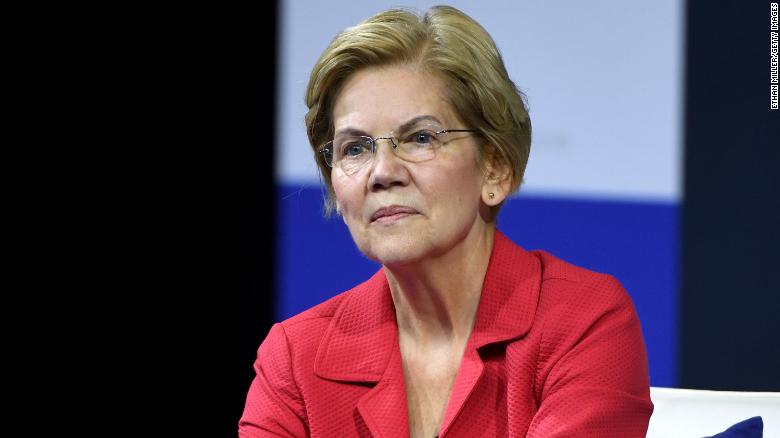 In this October 2, 2019, file photo, Sen. Elizabeth Warren listens to a question from an audience member during a gun safety forum in Las Vegas.

(CNN)Elizabeth Warren said Wednesday that she is ready for a convention floor battle this summer if none of the Democratic candidates reaches a delegate majority during the primaries.

The senator from Massachusetts made it clear at a CNN town hall in South Carolina that she would be willing to lobby superdelegates, who have votes on the second ballot if there's no outright winner, when asked if she would continue her candidacy even if she were trailing in the delegate count.
Asked by an audience member why the person who gets the most votes shouldn't be awarded the nomination, Warren said the rules set a higher bar -- and that she intended to fight to the last.
Warren also suggested that the argument by Sen. Bernie Sanders of Vermont that a candidate with a plurality should be declared the nominee was disingenuous, noting that his 2016 campaign, despite losing to former Secretary of State Hillary Clinton, publicly argued that convention superdelegates should consider swinging the contest in his favor.
In the aftermath of that primary, in which the superdelegates overwhelmingly backed Clinton, Sanders and others struck a deal to dilute their power. Unlike four years ago, they will be able to vote only on a second ballot in 2020.
But in this crowded field, that compromise could come back to bite Sanders.
"The way I see this is, you write the rules before you know where everybody stands. And then you stick with those rules. So for me, Bernie had a big hand in writing these rules. I didn't write them," Warren said.
"When they were putting together the 2016 platform for the Democratic convention, those are the rules he wanted to write. And others wanted to write. Everybody got in the race thinking that was the set of rules," she added. "I don't see how come you get to change it just because he now thinks there's an advantage to him for doing it."
CNN's Don Lemon followed up and asked the senator, "To be clear, would you continue your fight for the Democratic nomination even if another candidate arrived at the convention ahead of you in the delegate count?
"Yes," Warren responded.
"Because a lot of people made $5 contributions to my campaign to keep me in it," she said when pressed by Lemon.
The senator said that after a recent Democratic debate, "We raised $9 million in three days, from just folks who said I'll pitch in $5 or $25. They are the heart and soul of the race."
"I made the decision when I got in I was not going to spend 70% of my time raising money from billionaires and corporate executives and lobbyists. I was going to spend 100% of my time with folks," Warren said.
"As long as they want me to stay in this race, I'm staying in this race," she said. "That, and I've done a lot of pinky promises out there. So I've got to stay in this. I told little girls we persist."