Other major US indexes also declined in after-hours trading. S&P 500 (SPX) and Nasdaq (COMP) futures each fell 1.3%.
The US Centers for Disease Control and Prevention said earlier that a resident of Solano County, California, tested positive for the virus without having "relevant travel history or exposure to another known patient." They warned that the case could indicate that the virus has begun moving through a community in the United States for the first time. 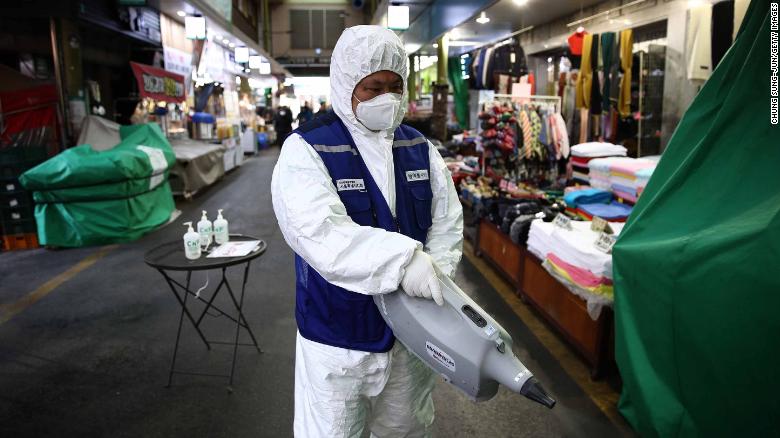 Coronavirus is fast becoming an 'economic pandemic'
The CDC announcement also came as President Donald Trump tried to assuage fears about the outbreak. At a press conference Wednesday, he defended the White House's response to the disease and stressed that the administration has resources devoted to combating the virus. Vice President Mike Pence is now in charge of the government's plan, he added.
CDC officials, though, have told Americans that health experts foresee the virus spreading in the United States.
The coronavirus has killed at least 2,800 people worldwide and infected 81,700. While the vast majority of cases have been recorded in mainland China, the virus has spread to every continent except Antarctica, sparking alarm. More than a dozen cases have been recorded in the United States.
Stock markets this week — many of which had been brushing off the virus — have been rattled by fears about how the virus could hurt the global economy and wreak havoc on supply chains. After Italy and South Korea recorded a sharp spike in infections over the weekend, the Dow plunged more than 1,000 points Monday.
The Dow has now lost more than 2,000 points, or 7%, this week. The S&P 500 has turned negative for the year.
Asian markets, meanwhile, were mostly lower during Thursday trading hours. Japan's Nikkei 225 (N225) was last down 2%, accelerating earlier losses, while Hong Kong's Hang Seng (HSI) slumped 0.7%. South Korea's Kospi (KOSPI) fell 0.8%.
China's Shanghai Composite (SHCOMP) was the only major index in the region that made gains, adding 0.6%.